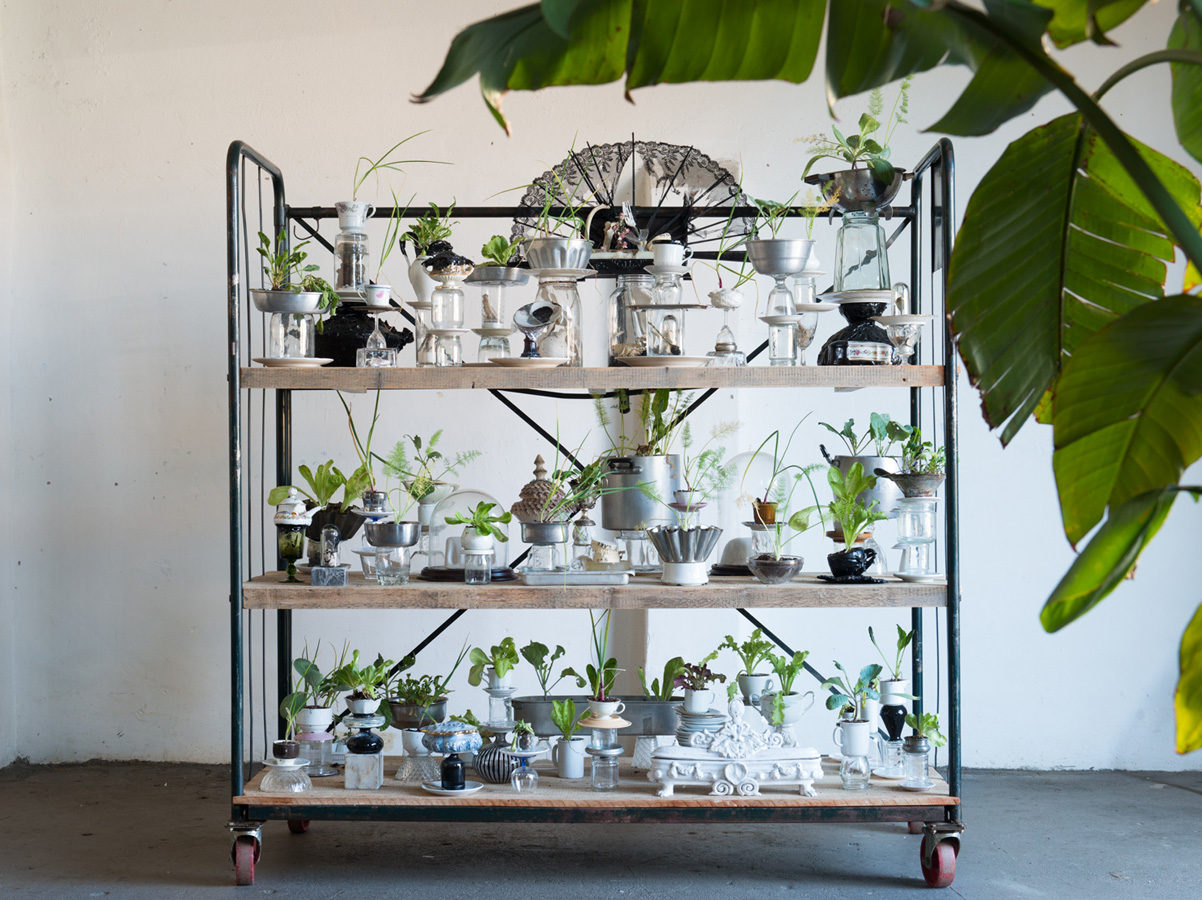 The Wunderkammer of the Living

These Strange Objects of Philosophy

The present-day philosophical scene is populated by strange objects: seeds, roots, leaves, mushrooms, lilies, lichens… plant life has burst into theoretical thought and the art of creating concepts seems marked by the horizon of a new naturalism. Octopuses, oncotopes, spiders, ants, birds, monsters of various formats pop up. And then there are the ruins, and uncultivated landscapes strewn with disturbances. Viruses are not missing from this list, and neither are houses or huts, breathing, the tactile, affects, or walking. Wine, yeasts, and microorganisms are not excluded, either. Non sono esclusi il vino, i lieviti, i microorganismi. So, is this an ecosophical turn faced with the environmental crisis, and the threat of disaster which hangs over living things? Perhaps. Though philosophy is no better prepared to save the world than any other discipline.

The philosophical Wunderkammer of these present times is crowded with objects, and just as many opportunities for thought. We can imagine the philosopher intent on heading out into the world, ready to seize any pretext to reflect on the most disparate things, to update the catalogue of novelties that have never appeared in the Western philosophical record. It is as if philosophy were reflection. The way it had developed up to this point, it had rather more resembled an art, a technique that has to invent its own tools even as it hazards an always insufficient answer to the question: “to do what?”. And if there have been times when philosophy invented the logosand a res extensa, an inside and an outside, a subject and an object, but also others in which it thought about becoming and metamorphoses, affinities and confluences, today it seems rather more intent on being surprised by living beings. It is not that mycetes and plants bear some special wisdom thus far overlooked by biology and botany, nor that is philosophy’s job to defend them from the risk of extinction or from the pain inflicted on them by omnivorous and industrious humans, giving them dignity as subjects with rights. If these strange objects stir philosophical interest today, it is not because of the fashion for anti-speciesism in moral philosophy, but rather because they allow us to question the way we think and hence its effects on how we stand in relation to the world.

So, why deal philosophically with a mushroom? Because in the narrative of the apocalypse, the end of the world and the collapse of environments, the regenerative capacity of mycetes challenges the way we think about crisis, the relationship between what is ending and what is beginning. The observation of plant pioneering, or the recognised ability of certain life-forms to establish themselves where life is absent or lacking, allows us to think about the way in which an environment is gradually produced, about the system of alliances that the chain of agents triggered by any singularity can set in motion. And the individual, even the human one, will no longer be able to stand aside, as bearer of his privilege as a living being who can look on things knowingly. For the holobiont will come to remind him of his relations of symbiosis and coexistence with everything else, and that his life as an individual is not so independent from that of others. So, amidst the disorder, in which precariousness takes the form of an ecologically compromised, ruined world, the life left fragile by anthropic impact does not find its restoration through conservation, in the ecology of the protected area, but rather in the capacity for a revival of life itself that regenerates environments and produces new, ever-unstable ones. The human being is therefore neither a guardian nor a rentier, and can become part of this affair called Nature once again, even starting from his specificity as a mushroom-gatherer, a practice of wandering and reading signs, an ecstatic experience of surprise and chance, an orienting technique and a form of sustenance. Mushrooms thus become a philosophical matter because they interpellate the way in which the human being configures his relationship with what is understood as nature, generally a vague background with which to entertain himself, at any rate at a certain distance, for tourism or agriculture, or to depict it.

If there is a common feature in the bursting of these living entities onto the philosophical scene, it is that of trying to rewind the tape of metaphysics and its consequences, detaching things from their names and from the place assigned to them by knowledge in the taxonomy of functions. Doubtless, in botany the attributes of a plant species will continue to cling to their names, but in political philosophy Stefano Mancuso’s neurobiology will help us rethink the relationship between the one and the many and the ways in which individuals can live together without delegation and representation. In the philosophy of Emanuele Coccia, who has an agricultural background, the observation of the world starting from plant life transforms metaphysical discourse into a cosmological narrative that dismantles the dualisms of potential and action, form and content, interior and exterior, reason and the senses. As for Felice Cimatti, the life abandoned to the fullness of the world – the life of animals, the life of vegetables and all those entities that do not know the experience of separation from the world – is that extrinsic life towards which the human can only continue to strive and which, in its inaccessibility, indicates the inescapable handicap of the linguistic animal.

The philosophy of nature being reconstructed is not a philosophy “of nature” because it includes Nature among its objects of reflection, but because it tries to dismantle that separation on which part of the edifice of modern reason rests when it sets human life outside of nature and nature outside of reason. So, Emanuele Dattilo’s investigation into the relationship between mind and matter, between spirit and world, is not a way to put things back in the history of philosophy, but to think about the permeability of matter to life, that is a new materialism. The philosophy of life should then be understood as a subjective genitive, as Stefania Consigliere does when, through re-enchantment, she exhorts us to move forward in the world, understood as an animated multiplicity different from a thing, and advances a critique of the ontology of dissociation that continues to separate something within us and us from everything else, producing pain. Meanwhile, in the pattern of the new kinships – kinin English, translating a philia, a friendship between us and everything else – shells, penguins and stem cells pop up. They are, certainly, of Anglo-Saxon import, but they are assembled to propose a philosophy of care for things and between things in the work of care, which is also editorial care, of Angela Balzano, a translator and therefore a philosopher.

Translators and architects, art historians and gastronomes, craftsmen and artisans of a knowledge that transcends the boundaries of things and disciplines, wander through the chamber of wonders of the natural philosophy of the new millennium. The careful observation of lichens, a model of resistance as well as the first agent of the organic, a membrane for translating the inert into life, is today an integral part of the aesthetic research of art historian Riccardo Venturi. Just as the tactility of the tongue in the experience of critiquing the taste of wine is, for the philosopher Nicola Perullo, a contemporary form of that connoisseur’s taste of Campanellian vintage which offers direct access to the intimacy of things and the experience of overcoming their alienness. The reversal of the viewpoint on the landscape in the thought of architect Annalisa Metta, from a reassuring vision of the belle contrade to the representation of a collective autobiography, and thus a paradigm of monstrosity – our monstrosity – allows us to think about the contingency and coagentivity of design, thus of technique, thus of making the world, far from the purpose of the work and the permanence of the monument.

If the site for constructing a new thought of nature finally allows things not only to be things, it also allows each of us to escape from that place to which we are destined by competence, profession, identification or simply salary. Behind us lies an era – a strictly Italian one – in which the division between artists and artisans, theoretical knowledge and practical knowledge, was not so clear-cut. In the Renaissance, the confusion of professional destinies did not stand in separation from that naturalism in which the human was no longer at the centre, and so could be anywhere, and the world was intelligible through analogies and references, correspondences and connections. A world criss-crossed by a sensitive reason capable even of sensual relations with things. It is this connectivity that new interpreters of suavitas are thinking about today. It matters little whether they are philosophers or artists, curators or interpreters – they are all part of a common scene.

So, in the cabinet of curiosities of animated things, of motor-affects, of new friendships, other objects have appeared in addition to those manipulated by philosophers. Chiara Bettazzi’s Wonder Objects, for example, are installations of contingency, made up of precariousness and equilibria, finished objects re-crossed by new life, whose boundaries cross one into the other, in the continuity of matter, between organic and inorganic, to form a scene of being without a name, to be traversed and observed from every angle but with caution, careful not to bump into, not to disturb that harmony between things recreated by the artist and always at risk of returning to a pile of ruins. Or Marta Roberti’s bestiaries, where the representation of a singular life – that swatch of a being which is named a peacock or a lycaon or an elephant – is done in the negative, in the juxtaposition of strips of thin surfaces, ever incomplete portions of these sheets, insufficient to containing the whole of an object, a life that cannot be cut out as a singular portion, disconnected from the rest. Or Felice Cimatti’s animals, which have escaped from the pedagogical laboratory of naturalism for children, from the seriality of National Geographic models made in China, reappear stuck back together on new arks from which Noah has disappeared. They remind us that life goes on without us, that it flies over the Calabrian motorways while we queue up on these “great works” (as Italians call major construction projects) to go on holiday. Here the philosopher plays the artist. We have said it: this is the confusion of a new Renaissance. 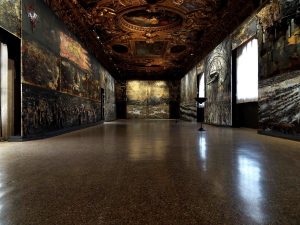 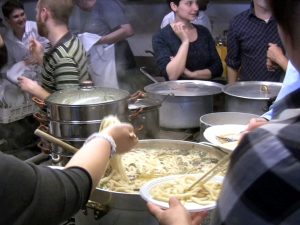