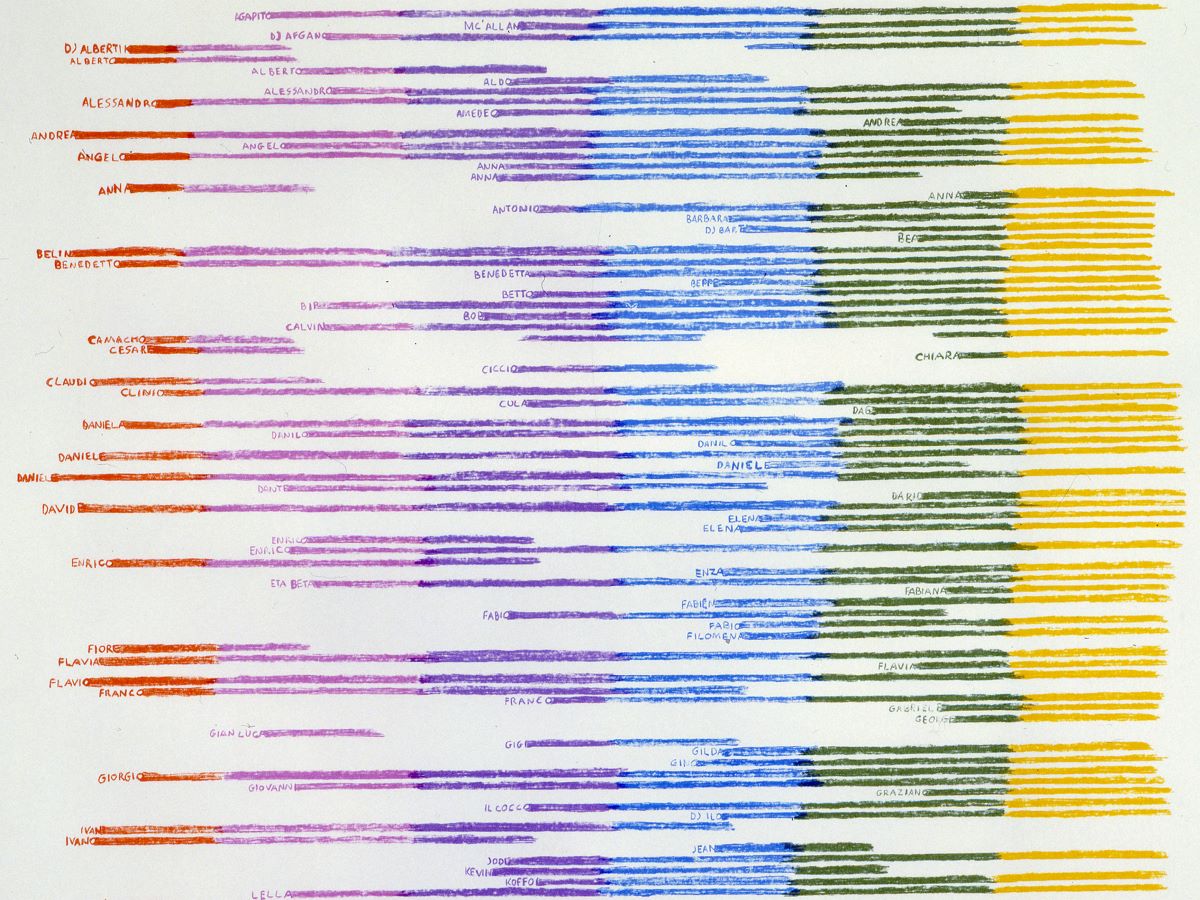 «The only reason to talk about stories from the past

is to discuss how things could be (different)»

This short text tries to give an oblique view of the Link Project, an experience that took place in Bologna between 1994 and 2001 or so, in which I participated together with a fair crowd of people, when we were between twenty and thirty years old. The space which I have to write in here is very limited, and I feel that it is more meaningful to try to extract some key concepts which, it seems to me, can historically situate that project in a broader syntagm, even touching on the contemporary. Indeed, if memory is an imaginative activity, there is no doubt that it can turn into fantasisation, and thus into a producer of ideas and idealisations.

“Pop culture” doubtless arrived in Italy from the United States. This contribution marked a difference from what had been meant by “popular culture” up till the 1960s. “Pop” was “art” (or not), but not all “art” was “popular”.

The influence of that mythological machine implied a decidedly distinctive trait, that of a lifestyle that reversed the polarisation between the roles of high and low.[1]

In Europe, perhaps only in Great Britain was it possible to witness, as in Italy, this short-circuit and a feverish re-appropriation, less of the term itself than of a certain aesthetic and a specific way of doing and appreciating things.[2]

Here, I would also like to point out — for those who were not there — that for a long stretch of the twentieth century, pop did not coincide with the mainstream. Rather, it appeared with the face of an “under-culture”,[3] adopting the often combative and demanding attitude of the alternatives that marked the beat generation. It very often emerged from the ghettos, or found inspiration and comfort therein.

Its fatal industrial patina is a later, relatively recent phenomenon, which is already flowing into retromania.

In the countries of advanced capitalism, parallel to the dissolution of the mass-worker, after the cycle of crisis that began in the late 1960s, a new form of “proletarian aristocracy” was taking shape, technically skilled and with its attachment to the trade unions having matured.

There is perhaps a connection with the emergence, in the same years, of cultures that emerged from subalternity with notions of an “intransigence of taste”, which made them appear as new elites. Each subculture arrogated itself the right to lay down the law in terms of taste. The climate was fanatically contentious, even if transitions from one style to another were not necessarily perceived as a betrayal, and there was a broad spectrum of co-influence characterised by the “transversality of frequentation” of multiple aesthetic territories.

In Hobbes, the concept of the “people” absorbs the dissolute multitude, taking on the figure of the “sovereign”.

Anarcho-punk and operaism found some points of contact in Italy, and “Italian thought” returned the concept of “multitude” to the Anglo-Saxon world as an adaptive effect and original contribution. It was a sign of impatience with Catholic-communism.

A punk-operaista diaspora drove a multitude away from certain places/modes of production/consumption.

In 1994, therefore, we found ourselves working in a “factory”, the Link Project.

The factory is first and foremost a place. A large one, albeit never large enough to allow a multitude to operate. It is situated on an intermediate terrain between public and private, articulating areas of shadows and of visibility. In this sense, it functions on the one hand as “theatre of pose” and on the other as a “theatre of life”; that is, with moments of the representable and moments of the unrepresentable. Anyone who ever sought to conjugate them would inevitably miss the moment and the opportunity.

Life flows like the frames of a film, and contexts are like “settings”. Precarity is embraced as a choice and interpreted as an attitude toward the transitory, the temporary.

To lead a multitudinous life that goes beyond the extemporaneous encounter, unique and unrepeatable in each instance, there needs to be a “form of organisation”, a marbled pattern. It is assumed that the diverse can coexist and each produce their own divergent series (or “formats”).

An encyclopaedic calling has always inspired collections of species and genres; there have been publishing houses that have repeatedly attempted to span the entire “multiverse” of difference by way of “encyclopaedic compilations”, the fruit of paradigmatic choices (do you still remember some of the series by Einaudi and Adelphi?).

But turning to Link, let us first turn to the field of the living, which is unstable and ever-changing.

The source of inspiration for an organisation of this kind was — and could plausibly again today be — a magazine. Thus we enter into a world-of-editorials (a world-of-relationships),[4] to create a “living magazine”.

The editorial teams were the minimal units of connection, comparison and ordering the ranks. These were collectives that made choices (the counterpart to today’s purchasing groups). Small or large, they were based on a geometrics of odd numbers. 3 was the basic unit, and this could be increased up to 5, 7, 9, or 11 (in very rare cases), and no more than that. In the editorial dynamics, these odd numbers guaranteed a basic disparity, which prevented the genetic reproduction of consensus: this was not the family (father-mother-offspring), but a dialectical process that could take on many forms of combination. Whatever went beyond these accounting units was already an “assembly.”

In assemblies, it would be good to never count ourselves (a practice implicit in voting rituals, which can be avoided, indeed even easily so). Assemblies represent the places of confluence-divergence, and are the organs of non-totalisability. A good assembly can last many hours and express unevenness and friction. However, sooner or later it comes to an end, perhaps even out of exhaustion. One should come out of it strengthened by one’s divergence — that is, strengthened by confrontation (not consensus).

Facilitating assemblies is a strange art.

Complex “situations” also include “singletons”, sets constituted by a single member.[5] Singletons have greater agility in movement, and provide for much passing of information between unequal and multi-cellular assemblies. They are often perceived as crazed splinters. Continuing with the biological parallelism, they function like macrophages: autonomous agents capable of performing many operations, both for the good and the bad of the system in which they move.[6]

It is said that real decisions are made in the corridors. And so are transversal negotiations. In a situation that would be difficult to reproduce, at the Link Project the corridors consisted of the more or less large rooms that housed the events discussed and planned in the editorial, inter-editorial and assembly areas, which set out plans for the use of the space. So at night, amidst a lot of crowds, during and between events, there was a lot of electronic music and various kinds of smoke.

Let’s try to imagine what would happen if all the debates and deliberations of a parliament found their exclusive realisation in the Transatlantic. “Undercommons” and “commons” (common spaces) coincide, as the compositional plane overlaps with the plane of immanence.

A planning space configured in this way cannot but turn into a mirror-like body of water: a surface of reflection traversed by sometimes peaceful and sometimes swirling currents, as in a complex of karstic caves situated on various levels.

The fact that such a “situation” can have (or could have) a very large (audience) participation, bordering on a mass phenomenon (but still short of that) may come as a surprise. This is not an effect of the intensity of the individual’s experience (which also occurs in simpler, more controlled situations).

The intensity more directly owes to the quantity of currents that flow together to form the “situation”. The multitudinous way of proceeding is characterised by the turbulent coexistence of lively aesthetic intransigences, which can produce effects as long as the capacity allows. The acephalous and the octopus (this latter a symbol rightly adopted by the MACRO in Rome, which has been conducting another interesting experiment in living editorship in recent years), are figures that live well in a third aquatic and submarine landscape, in caves populated by creatures that are seen and unseen, often change their appearance, and give rise to temporary configurations of an almost crystalline nature, only then to dissolve.

Among the prodromes of American pop, a current of literature with an uncertain status, called cyberpunk, came into being in the late 1980s.

In somewhat crude terms, the slogan “all technology to the people” circulated in certain circles in Italy.

The world is now a factory; one does not need to evoke postoperaista theories and the work done around the theme of the “general intellect” to realise as much.

The portable terminals that each of us possesses, beyond boasting the prodigious faculty of being constitutively connected to databases, condense fabulous miniaturised technologies of data collection (documentation) and processing (elaboration).

Today, the world is a vast theatre, where everyone plays the role of an extra. Life becomes a pose. But it is increasingly complex to master the distance that separates the lived moment from its representation. The immense labour of the living produces matter extracted and processed by third forms of agency that become its owners. A vast economy of intra-species exchange dominates the scene and the world has been transformed into an immense “plot” governed by a nuclear monoculture.

A vague sense of isolation accompanies this rich and desolate landscape. Here, worries about the future (the great absentee) cloak the subtraction of a situated and situationautic present, which to this day remains the best possible enterprise.

[1] Around the mid-1990s onwards there began to appear the terms “nobrow”, referring to cultural and historicising phenomena that mix high and low cultures, and “overground”, instead signalling the mainstream emergence of underground elements and phenomena.

[2] Unlike those who lamented the tendency towards a dissipation of national identity, Pasolini’s grandchildren lived through this with a passionate flippancy, not necessarily being homologated. Italian pop expressed itself with forms of its own, less so in the musical and literary fields (on this score it remained rather provincial) but with great force in the visual, cinematographic and design fields. Its icons were Olivetti and Brionvega, Pino Pascali was a superhero, Mina was divine, and if we compare the interiors of films like A Clockwork Orange or The 10th Victim, we find curious resonances in terms of design and costumes.

[3] TN: Here the author plays on the word malavita, referring to the criminal underworld.

[4] TN: here the author plays on the assonance of the Italian for editorial board (redazione) and for relation (relazione).

[6] “The ‘corridor of lost steps’ is the antechamber to parliament, the place where MPs stand waiting for one sitting to be followed by the next and where they meet journalists with accreditation passes. The term ‘corridor of lost steps’ is no accident, but refers to the fact that small groups from all parties, absorbed in endless chatter, spend hours and hours in this place which, for many, is where they lose most of their time in parliament”. Taken from presidiomontecitorio.it. 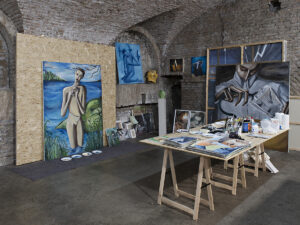 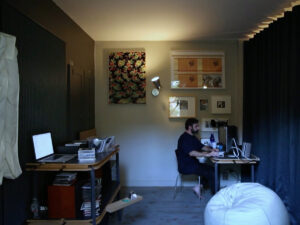